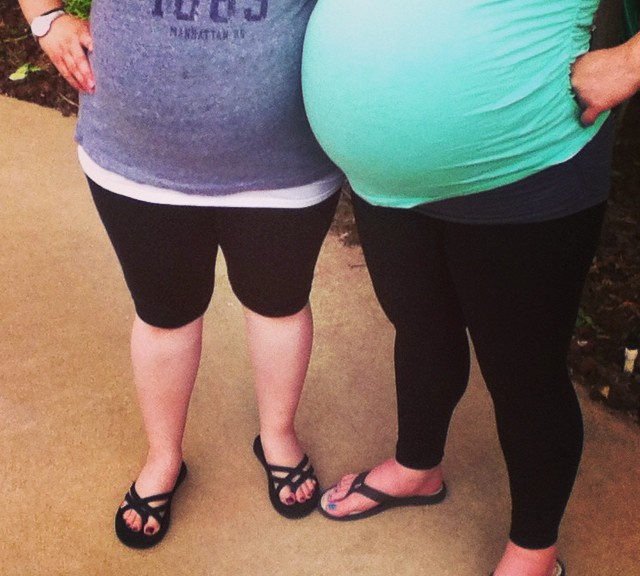 35 weeks marks the last week of this pregnancy that I will not see the doctor.  Ack!  That must mean things are getting serious.  According to the giant hard parts in my stomach, Nino has responded to this milestone by crawling higher up in my uterus instead of venturing down into my pelvis. I don’t know why I’m surprised.  His poor Mama has always been directionally challenged too.  I came to the realization last week that I think Nino is shy.  She moves the most when we’re home alone, laying on the couch, right after Steven leaves.  In the sonogram pictures, she has always had her hand over her face.  And on weekends when we do a lot of sitting around, but there are lots of different voices in the room, she only moves very slightly on and off throughout the day.  Work days where I’m the only one in the office?  Constant movement.  Sweet little shy stinker.  Hopefully we’ll be less scary to her when she’s out in the world.  There’s not much room to hide away in our little apartment.

New symptoms this week: my feet were slightly swollen at the end of last week and into the weekend, mostly in sympathy for Hailey and her swollen twin feet.  Since then they’ve gone back down to normal size, but I’m mostly just wearing my Tevas every day now anyway and guilting Steven into giving me foot rubs as often as possible.  Also, the super pregnancy nose has arrived this week which means that I can now smell my own breath and it is… not good.  My official apologies to everyone I’ve ever interacted with.

Now that the heat and humidity have finally arrived in Manhattan, I have two new cravings this week: watermelon and lots of it and Izze sparkling blackberry soda.  So good.  So sugary.  So amazing.

Crazy people: Steven took the car seat to get it checked this week to make sure we had installed it properly.  It passed with flying colors, but then I read that we should start practicing carrying it around and buckling and unbuckling it.  So now we’re the extra crazy people carrying around an infant seat with a bunny in it every night and morning.  It’s ridiculous, but also helpful.  Turns out we’re both REALLY BAD at latching and unlatching the car seat.  Chester the Bunny wakes up and screams every time.

Mark your calendars: Also this week we attended Baptism class, which Betsy helpfully suggested might be easier to get to before we have the little baby running our schedule.  I’ve been planning Nino’s baptism in my head since before we got pregnant, so this is the first class that I’ve been genuinely excited about attending.  Nino’s first sacrament is officially scheduled for Sunday, September 20th.

Speaking of classes, we had the dreaded three hour breastfeeding basics course this week.  We were both exhausted by the time Thursday rolled around and not particularly excited about three hours of lecture on what I feel should be a fairly intuitive process.  Steven was annoyed with all the talk that wasn’t about technique,  but I found the technique parts the most overwhelming.  So many things to look for and remember!  Are you tummy to tummy?  Does the ear, shoulder and hip line up?  How’s the latch?  How’s the angle?  How’s the sensation?  Do you hear the right 5 sounds or the wrong 5 sounds or 3 good sounds and 2 bad ones?  What does that mean?  Did you write down which side you started on and for how long and, and, and, and.  Whoa.  By the time we reached the halfway break my head was swimming.  Our last class is next week and is something called Hug Your Baby.  So maybe we’ll learn about the proper technique for hugging your baby?  Who even knows any more.  I’m just so thankful it’s the last one.

Blanket update: I used the road trip to work some more on the blanket, since we had another hectic week planned.  This week I feel like it’s looking more like a blanket, though the edges still look a little off to me.  I think I need about 10 more hours on it before I can start the border, so my next goal is to get that accomplished before Betsy and company come up for their next visit.

In more exciting news, Abby came over this week to help me go through my clothes and I was able to cut it down from three tubs of extra to one.  I still, admittedly, have way too many clothes, but I felt a little better about the progress. Hopefully Papa Francis would be proud.  I also got rid of a ton of shoes and made enough room in my closet to move some of the extra boxes from Nino’s room into mine.  Slowly but surely, and with a lot of help from Abby and Steven, Nino’s room is starting to look more like a baby room and less like a dumping ground for all of our stuff.  I think Steven knows that once all the clutter gets cleared out, the decorating begins.  No wonder he’s so anxious for Nino to get here.

Daycare update: I finally started to recover a bit from the First Aid class of doom this week and decided to get back on the task of finding and selecting a daycare.  One of Steven’s friends mentioned that calling references really helps (duh!) so we went back to our list of possible places to see what we could find.  We had pretty much narrowed it down to one place that I felt okay about, and Steven contacted her to get a list of references.  She called us back later that week to let us know that she had actually decided to shut down her day care.  Of course.  I was immediately frustrated and angry, and then realized that this is exactly what I had been praying for.  I keep asking God to close the wrong doors and only make the good opportunities available to us so that we are protected from making the wrong choice.  Then, when he does just that, I get all sulky and pouty and despair.  It’s really amazing he doesn’t have more birds poop on my stubborn head.

In the meantime, we set up an account with Child Care Aware, a site that Steven learned about through his Daddy Basics course.  Child Care Aware is really nice, because they let you put in the date you’re looking for and the age of your child, and they only show you who has availability.  Steven and I picked out the same two people and after some really positive reference calls this weekend, we think we finally have it narrowed down.  Fingers crossed and prayers up that this is the right choice for us and for Nino.

Furlough Friday: On Friday of this week I got my official furlough notice (which has already, thankfully, been canceled).  Because I let way too much of my self-worth get wrapped up in my job, I was feeling really sad about being labeled a non-essential employee.  Steven, saintly husband that he is, immediately sent me this response: “I love you, and you are absolutely essential to ME!”  Marrying a sensitive wordsmith is easily the best decision I’ve ever made.

Road Trip! Last weekend we took our final road trip before Nino to go see Beau and Hailey in their new digs in Oklahoma City.  We were planning to go this weekend to meet the twins, but Hailey is super gestational woman and kept them in for 38.5 weeks.  She turned 30 on Sunday, and we were both so excited to get to spend one final weekend together as the fearsome foursome before we become a group of 7 this summer.  I was absolutely convinced that she was going to go into labor the second we left Manhattan, or the second we arrived on their doorstep, or in the middle of the night on the first night, etc, etc.  But all the babies were very well behaved and let their Mamas have one last weekend together.  Hailey and I were so excited that we outlasted the boys and stayed up until 3 a.m. on Friday.  Saturday we had a lazy day full of food and Jamba Juice and pedicures and leg massages and then Sunday we did more lounging and playing with Lucy and eating and lots and lots and lots of laughing.  I’m so thankful that we’re having our babies at the same time, because I feel like it seals us even more as forever friends.  Especially if Nino is a girl and has the good sense to marry one of their boys… I’m hoping it’s the first of many memorable weekends in that house.