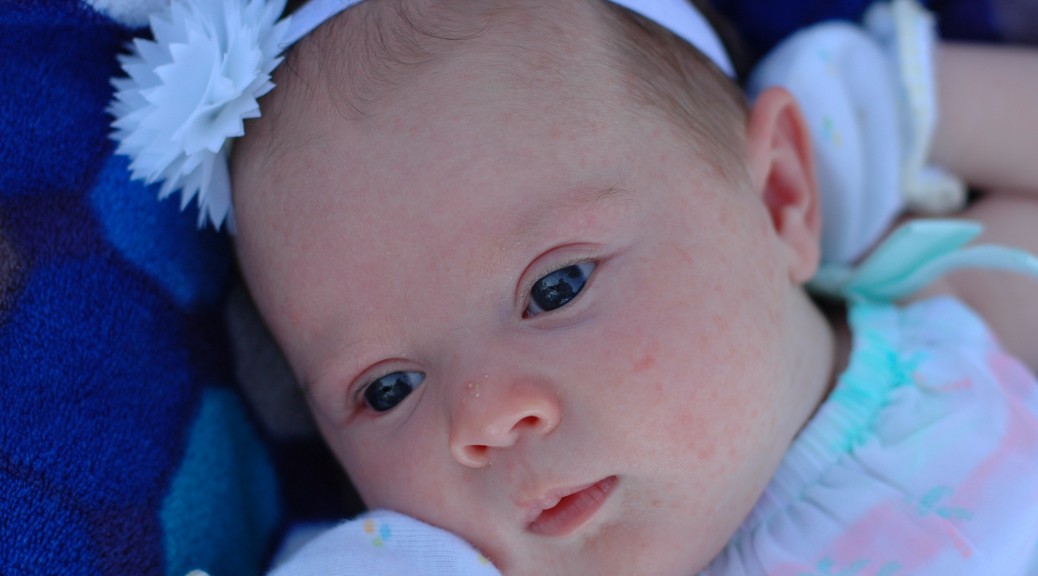 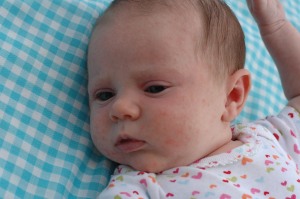 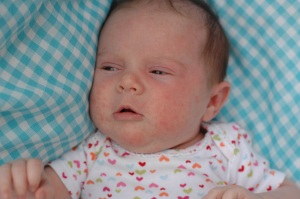 Bonnie celebrated her one month birthday at the cabin, so we tried to do a little photo shoot out on the deck. Steven has been learning how to take pictures with his fancy camera which excites him and really stresses me out. I think I still prefer my grainy iPod pictures.

Bonnie had some suspiciously chill tummy time during the photo shoot.  Then about 10 minutes later we gave her to Poppa Ted and she proceeded to have the biggest blowout diaper of her young life. Poor Poppa. Poor Bonnie. Now we know if she’s acting oddly serene to watch out.

We had her 1 month doctor’s appointment on Friday and Dr. Duff confirmed that Bonnie was perfect in every way.  She weighed in at 9 lbs 8 oz and 21.5 inches tall, which is a growth of almost 3 lbs and 2 inches. Phew! I guess we’re doing okay feeding her after all.

She’s been struggling with a bad case of baby acne for the last month, but it seemed to bother us more than her.  We asked the doctor about it and it turned out we’d been washing her face instead of moisturizing it – thus making the problem worse instead of better.  Whoops.  Sorry, Bonnie. 😦

Bonnie’s first 6 weeks have been so much fun. She’s a really good sleeper and has adapted pretty well to napping in her swing or bed during the day. The first couple of weeks she really enjoyed peeing all over her changing table whenever we changed her, but finally stopped that when we went to Colorado.  One particular diaper change she managed to pee into the open drawer of her dresser while I was getting a new diaper out and got all of her clean towels and washcloths soaked. Clever girl.  We had her first scream-free bath at week 5 which was a relief for everyone (including our upstairs neighbors). We’re still not great about clipping her fingernails, and she really likes to have her hands around her face, so we try to keep her mittens on as much as possible.  She loves her car seat and goes to sleep in it immediately. We’ve only taken the stroller out twice, the second time with disastrous results. We took her out last Saturday to get donuts and coffee and wander around the bookstore, but we took too long and she got hungry and hot and then screamed the whole walk back.  Poor thing.  I’m not a huge fan of the stroller because it’s big and bulky and hard to get in and out of the house by myself. If I had my way, I’d just wear her anytime we have to leave the house. In the past couple of weeks she’s stopped screaming during tummy time, so we spend a lot more time on the floor these days.  Just today, I realized that she’s started practicing scooting, because in the time I’ve written this she scooted all the way off the blanket and on to the carpet. Such an athlete.

Goal #10: Never Give Up: Feeding is going pretty well, though she’s wildly erratic about when and how much she wants to eat.  I think we’ve been through two growth spurts when she demanded to eat every 2 hours. Other than that, she’s pretty content to eat every 3-4 hours and we’ve gotten much better at the process. It’s comforting to look back on that, because I remember very clearly trying to nurse her for the first time in the hospital and feeling like it was completely hopeless. Nursing was not as instinctual for me or Bonnie as I had anticipated, but luckily, you get to practice every 2-3 hours for the first week, so you improve pretty quickly. Coach Snyder’s motto about getting a little bit better each day is definitely our parenting mantra these days.

Bottle Baby: We’re going to start the slow transition to bottles in the next couple of weeks to get her ready for day care in October. I’m a little worried about trying to figure out how to pump while I’m home with her, but surely if we keep after it, we’ll figure it out. Steven is very excited to help out with feeding, but I’m a little overwhelmed by the process. Not to mention the dishes! So many bottles and parts and thingamajigs to keep track of and wash and sanitize and find places for. I’ve been leaning on Betsy for all of my Bonnie questions, but this is one area that she’s never had to worry about, so it seems even more daunting.  Any Mamas out there have any tips for me about simplifying the process? Things that require lots of equipment and time really drive me crazy.

Smile Milestone: In the past couple of weeks we’ve started getting smiles! She smiles at me with this big, crazy, muppety, open-mouthed grin, but has a totally different one for Steven. She smiles at him every day when he comes home for lunch and basically just gazes up at him for the whole hour. Her Daddy smiles start in her eyes and are just the sweetest things in the world. Such love already. They’re my favorite pair.

Fear (not comparison) is the Thief of Joy: Slowly but surely, the fog of fear and doubt and panic about being a Mom is starting to lift. The first couple of weeks were really hard – way harder than I had anticipated. For one, I thought the crazy hormones of pregnancy would be worse than the crazy postpartum hormones.  Wrong, wrong, wrong. I felt like the postpartum hormones were a million times worse, especially at night. Even though I was tired, it was so hard to fall asleep at night because I was convinced that as soon as I fell asleep, Bonnie would stop breathing. I never had this fear during the day when we would nap together.  There’s just something about the night. I blame SIDS. Luckily, the fear and weepies only lasted the first couple of weeks, though we still sleep with the lights on. And I still wake up periodically to check her breathing. I know that she’ll have to move to her crib eventually, but that transition seems impossible right now. Betsy says that fear is there with each and every baby and it’s the worst part of the whole process. I believe her, but it’s also the only thing that has made me question whether I can do this, or do it again someday. Bah. Get out of here, fear! Quit robbing my joy.

Day Care Update: On Bonnie’s 3 week birthday we finally got a spot in a day care, so now I’m trying to mentally prepare for the idea of spending my days apart from her. We’ve had such a good time on maternity leave napping and blogging and watching Downton Abbey.  It breaks my heart to think about how fast time is going and how quickly I’ll return to my normal days. There are days when I think I’m ready and nights when it makes me cry, but I’m comforted by my own happy day care memories. It seems like this parenting gig is just an endless exercise in letting go, so I know that we can both handle it. Unfortunately knowing and wanting are two very different concepts for me right now. Luckily we have 6 more weeks together before we have to take that next step.