We had another baby!

Margot’s due date was Sunday, March 3rd. With Bonnie, my labor started at 3am on her due date, and Charlie was a week early, so I’ve never had the uncomfortable privilege of being “late”. At my 39 week appointment, my doctor casually mentioned that he was going out of town the following weekend, so we tentatively scheduled an induction for March 6th. I was a little annoyed, but tried not to worry about it, since I’ve never gone that long. I ate spicy food, cleaned the house, ran around after Bonnie and Charlie, and mentally prepared to have a baby sometime that week. So when my 40 week appointment rolled around on Monday, March 4th, and there was still no baby, I was a little bit frustrated and a whole lot tired. My doctor kindly stripped my membranes and agreed to bump my induction date back one day to Thursday, March 7th. I still really wanted to avoid an induction, but had faith that if we gave her one more day, Margot would come on her own.

I worked Monday and Tuesday and then had enough – mentally and physically. Steven and I both took Ash Wednesday off work and got to go to mass together that afternoon. We picked up the kids from daycare, finally took the cars to the fire station to get the car seats checked, and then took one last trip to Traditions as a family of four. Matthew picked the kids up that evening to take them out to the farm and Steven and I settled in to try and sleep before we were due at the hospital at 5 the next morning for the induction. 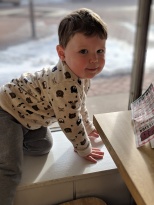 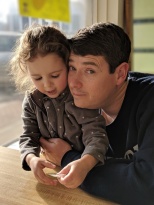 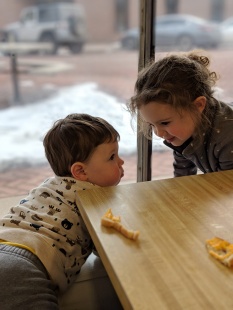 As luck would have it, I started having contractions off and on after we got back from Traditions. I thought they were mostly wishful thinking, as I had been having Braxton Hicks contractions for the last couple of months. I’d had some worth timing over the last week or so, but they always tapered off after a couple of hours and some rest. I finally got brave enough to start timing them around 10 that night and talked Steven into staying up and watching a movie with me instead of trying to sleep. I tested positive for the Group B strep again this time, so I knew we needed to get to the hospital with plenty of time to get a couple rounds of antibiotics going. Rather than waiting until contractions were 5 minutes apart, my lovely doctor told me that if they were getting stronger after an hour, I could go ahead and come in. Where was he when I was in back labor at home for 24 hours with Bonnie waiting for contractions that never, ever got closer together? So after 3 hours of contractions that were 5-10 minutes apart and getting stronger, I decided it was time to go to the hospital.

With Charlie, I was convinced that they were going to send me home, because he was so early, and the contractions weren’t nearly as painful (back labor is SO AWFUL), that I think I was in denial for all of the labor process. With Margot, since we had the induction scheduled 4 hours later, and I was already overdue, I felt much more confident about going to the hospital. I did feel a little silly coming in 4 hours early to my appointment, and the lady who checked us in at the ER didn’t make me feel much better when she called to labor and delivery and said, “Yes, she says she’s in labor.”

The contractions were still very manageable, but when they asked if I was ready for an epidural, I surprised myself by saying no. They checked me and I was a 4.5, so we agreed to give it an hour and see if I made any progress. After an hour, I was about a 6, and in much more pain, so I was thankful that we had come in early. Of course, by then, the anesthesiologist was in surgery, so I agreed to the IV pain meds while we waited for him to finish. I’ve never had IV pain meds before, but was mostly just desperate to get some sleep. They didn’t really help much with the pain, but they did make me very loopy, to the point that I had to keep my eyes closed and couldn’t really talk. So I suppose it was helpful? If I had to do it over again, I would probably just take the epidural first thing. I got the epidural around 5 and everything went smoothly, thank the Lord. The epidural is always the scariest part, but it’s such a wonderful feeling of relief once it kicks in.

My favorite doctor came in sometime that morning and complimented me on my decision to move the induction back one day (Margot is so cooperative). He broke my water and I went back to sleep, sure that we were on track for a baby sometime that morning. When the nurse came to check me around 10, I was at a 9.5, so I woke Steven up and we got ready to meet Margot. I noticed that I was starting to feel the contractions again, but only on one side. I tried pushing the button, but it just made my other leg even more numb. I didn’t worry too much about it, since we were clearly so close to the end.

Except that we weren’t.

I stayed at a 9.5 for 4 hours, and 10% of my cervix was still stubbornly hanging around. Finally, around 2 that afternoon, they decided to start some pitocin after all. At this point, I was tipped over on one side, trying to get gravity to kick the epidural into gear on the other side. Sadly, that didn’t work, and after 20 minutes of pitocin contractions, we were finally ready to start pushing.

With Bonnie, I pushed for almost an hour before the doctor decided that we all needed a little help and used the vacuum to get Bonnie free. With Charlie, the nurse let me do a couple of “practice pushes” before calling the doctor and he barely made it into the room to catch Charlie. So when the nurse started loading me up in the stirrups before calling the doctor, I was a little nervous. I should’ve learned this by now, but I always forget how intensely vulnerable and stressful the end stage of labor is. There are always a million things I want to say or ask, but I can’t bring myself to say anything, so I just look around like a trapped animal and hope that Steven will read my mind.

Is this why they recommend having a written birth plan? How on earth are first-time mamas supposed to know what to put on a birth plan? I’ve had three babies now, and am just now starting to realize what I would put on mine:

We got all loaded up and ready to push and then waited, for at least 5 minutes, for the next contraction. I could feel Margot’s feet in my rib cage, and I did not enjoy being in the stirrups. The previous 2 labors, Steven and I just held my legs on the bed. It was much more comfortable, but I have to say, I think it did help make the process go even faster. After the interminable wait for a contraction was over, I pushed twice, stopped, and immediately felt an enormous amount of pressure. At that point I was in a complete panic because 1. I had never felt pressure before and was convinced that the epidural was no longer working at all and I was about to experience the “ring of fire” that I had only read about in other birth stories. Also, 2. The doctor was definitely not going to make it in time. I started crying and begged Steven to push the epidural button again and tried to brace myself for whatever was coming. A few seconds later, without another push, I felt Margot enter the world and the nurse called out, “It’s a girl!”

Luckily, I heard her cry right away, and there were a flurry of other nurses in the room and I remember them asking Steven if he wanted to cut the cord and me answering for him that he definitely did not want to cut the cord. Funny that I can find my voice for him, but not for myself. They took her away to clean her up and she looked enormous – a whopping 3 oz bigger than Bonnie and 8 oz bigger than Charlie, but still 6 lbs. The doctor finally arrived and finished things and checked out Margot and seemed concerned about the hysterical, crying woman with the healthy baby, but assured me again that she was fine. She had some fluid in her lungs from being born so quickly, so we cut skin to skin time short so that they could suck her out, but after that, she was much happier and latched right away, and all was right in the world.

Steven had fasted the day before because it was Ash Wednesday, and I had accidentally fasted because he wasn’t eating and everything either made me nauseous or gave me heartburn at that point, so we were both starving. The nurse brought us sandwiches and apple juice and graham crackers and it was the most amazing food I have ever had in my entire life. 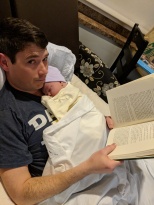 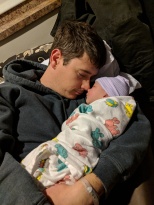 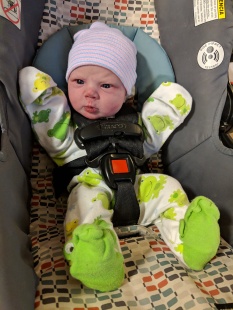 So after all that fuss about an induction, we ended up with 20 minutes of pitocin contractions. After scheduling an induction to make sure I had my doctor there, Margot decided she couldn’t wait for him after all. And after feverishly crocheting a boy blanket in the last month of pregnancy “just in case”, she was a girl after all, just like I thought from the beginning. Precious Margot, already blazing her own path, in her own time, in her own way.